I Screwed Up: my story 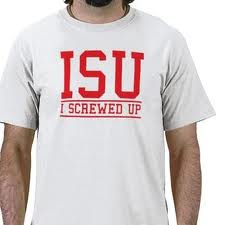 Last week I made a big oopsy.

Keeping it in context, was it as big an oopsy as the Samsung tablet oopsy they are now having to deal with with Apple? Well, no. However, in my typical overly enthused manner I accidentally sent Aliza Sherman, IT Rock Star, founder of Cybergrrls and Webgrrls.com, and author of a plethora of books; a speaker who commands thousands upon thousands of dollars to speak globally, an email that read, and I quote:

“Omfg. this is too easy. obviously these folks know something that we’re just beinning to catch onto!!”

I didn’t even spell beginning right. Good thing for me, this IT rock star has a sense of humor.

Her email in response to mine was the following:’

this message probably wasn’t meant for me, of course. ;)”

It wasn’t. OBVIOUSLY. It was meant for my partner in crime Jennifer Covello from parentingforpurpose fame, with whom I’m creating a tele-summit series featuring crazily successful businesswomen, most of who also happen to be moms, to help mompreneurs move their businesses to the next level. 6 different one hour interviews with 6 of the most successful women business owners we could get our hands on to give their secrets for success, their stories of how they grew their businesses from nothing to 6, some of them 7 figure incomes while still being mothers. How they found balance, how they learned how to work smart, not hard, the mistakes they made along the way, tips to the people on the calls on how they could do it to. How cool is that?

For now all you need to know is that it’s a huge endeavor, somewhat overwhelming, but Oh. So. Exciting. I’m feeling very much as though my life’s work…all the roads leading up until this point, have been truly leading to this point in my career….a meaningful place where I can help my peeps, in this case mompreneurs like me, create a sustainable, profitable career where they are working smart, not hard, have more time to spend with their families and less time working.

But I digress. The task list, especially for this first go around where all the to-do’s are new to us- is huge. And if we could only figure out how to wok the shared Google Calendar we’ll be 1 step ahead. Last week was a great one in that we secured—secured!!! Every. Single. Expert. Speaker that we approached to participate in the tele-summit. These are some well known amazing business women who have walked the walk and continue to, growing their own businesses while raising families of their own. An internationally renowned business coach, a PR superstar, a Social Media Expert to the Experts, a Client Attraction Magnet, and more….

So we were all tickled. Because she’d contributed to her book Mom, Incorporated , Jennifer sent Aliza the invitation to be interviewed by us in the tele-summit and cc’d me on it. Aliza responded immediately with a cool

“yes, thanks for thinking of me!

And then I sent the aforementioned email. Ooopsy…. So sue me. It was of course meant for Jennifer. By now you might be wondering why I’m laying myself out there for all the world to scoff, or perhaps you might see why I’m willing to look like an idiot:

If not I’ll spell it out:

a) I’m human. People screw up. If you follow my blogs you already know that about me. But:

b) That’s what makes me relatable. The big stuff- the stuff people count on me for, and respect my expertise for, I think you get, but, hey, yeah, I screw up. Like you. The big thing is that:

c) I was so psyched that these hugely successful women with very busy lives all agreed to be on this tele-summit with us to give back to other mompreneurs I could barely contain myself. So I hit the send button to the wrong person. Heck, we thought we’d have to ask 40 people to get 6 yesses. Instead we have a waiting list for round 2.

Obviously these people do get what we’re just beginning to get, and that’s why they’re so successful.

Stay tuned for upcoming foibles and details as we move ahead in development.